A Night on Koyasan (Mt Koya) 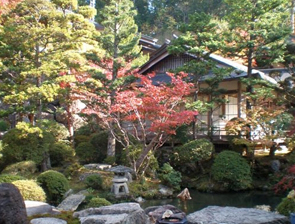 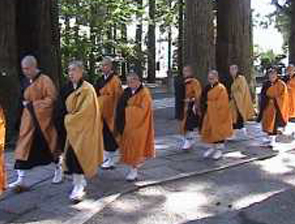 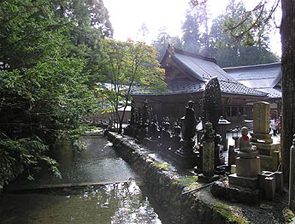 I have visited Koyasan (Mount Koya) in the past but this was my first time to stay at one of Mt Koya’s temples. A large group of us arrived early in the morning at Namba Nankai train station in Osaka and picked up our Mount Koya “free service” pass which would allow us to get a special price on return train fare, free bus fare, and discounted entrance tickets to some of the major temples. At Namba Nankai station we also picked up “The World Heritage Koyasan” free guide which provides a nice introduction and a basic map of the temples around Mount Koya (you can also pick up another English map a the Mount Koya cable car station). From Namba Nankai train station we took the Express train on the Mount Koya Rail Line, and it took us about 100 minutes to get to the Mount Koya cable car station. There is also a Limited Express train which is a bit faster (90 minutes) but all seats are reserved and it is more expensive.

Once we arrived at the base of Mount Koya, the train made its way slowly up part of the mountain. This ride was very pretty with the train weaving in and out of the surrounding forest, and from the train, you could see glimpses of the tiny villages and mountain streams below. We got off the train at the last stop – Gokurakubashi train station – and then we transferred to the cable car which took us up the final stretch to the bus station at the top of the mountain. The cable car ride was a bit exhilarating – a very steep 5-minute climb but from the cablecar, you could also enjoy a nice view of the countryside below. Once we arrived at the bus station we went to the Information Centre and picked up an English map of Mount Koya and then located the temple where we planned to stay that night – Shojoshin-in. There was a mad dash by the other visitors to the bus which was waiting at the station and it filled up fast. However, we quickly discovered the buses leave fairly regularly so we waited until the next one and boarded a practically empty bus, and had a comfortable ride to the main temple area.

From the bus station, it takes about 5 minutes before you start to see the first temples of many, many temples. Shojoshin-in was located at the other end of the temple area, and it took us about 20 minutes to reach Ichinohashi-guchi bus stop which is in front of both Shojoshin-in and the entrance to Okunoin – the famous cemetery on the mountain. Shojoshin-in is a very large temple and one of the oldest on Mount Koya. Indeed, it was built 3 years before Kongobuji Temple which is one of Mount Koya’s main temples. The architecture is exquisite, and the whole atmosphere makes you feel you have entered a very special place. We checked in to the temple and the monks took our luggage and stored it for us. We then spent the rest of the day exploring the countless temples and soaking up the fine autumn weather. Upon returning to the temple we picked up our luggage and one of the monks escorted us to our room. Since there was a large group of us, we were given three adjoining rooms separated by Japanese “fusuma” or sliding paper doors. The trees, animals, mountains, people pictured on the fusuma were terrific and the Japanese “tokonoma” was also tastefully done. In fact, everything complemented each other and made you feel you were staying in an ancient and holy place. From our three rooms, we looked out onto a gorgeous Japanese garden, and after we unpacked we just relaxed in our rooms and gazed out onto the garden.

At dinner time, one of the monks guided us to our dining area which was an exquisitely decorated tatami mat room. Each of us had our own little table and the tables were lined up next to each other and we sat in two rows facing each other on opposite sides of the room. The vegetarian meals were already set out before us and the presentation was wonderful. The monk who served us explained some of the temples prepare meals on the temple grounds but in the case of Shojoshin-in the meals are prepared nearby and brought to the temple. The monks, he explained, are far too busy with their religious duties to devote their entire time to taking care of the guests. This was one of the frustrating things about offering accommodation at a temple, he said – the monks really want to offer the best service they can but they are also restricted by their religious duties. While we communicated in Japanese to the monk, he could also speak some English which put the non-Japanese speaking people in the group at ease. The vegetarian dinner at Shojoshin-in was very good. Even though there is no meat or fish, the meal was certainly filling. I had trouble figuring out what most of the dishes were but it did not really matter. It was all very tasty.

After dinner, while everyone else relaxed and talked in the dining area, I slipped out and took my bath. Bathing hours are restricted from 4:00 until 9:00 at Shojoshin-in. While most people at the temple bathed before going to bed, I took an early bath to beat the evening rush. The rooms at Shojoshin-in do not have any private baths or toilets – all washroom facilities are shared. This added to the sense of communal living which exits among the monks at the temple. The men’s bath was a beautiful wooden bath, and I could stretch right out and relax with my head resting on the edge of the bath. I could smell and feel the wood while I rested my head on the edge of the bed and I almost fell asleep! After my bath, I put on my Japanese “yukata” (cotton robe) and “tanzen” (cotton coat) to stay nice and warm, and I made my way back to my room. The temple was eerily quiet at night and I enjoyed walking along the numerous temple hallways in my yukata and tanzen. It was October 23 and the temperature dropped to 3 degrees Celsius that night which made the cozy, warm tanzen come in very handy! At night the monks set out candle lanterns along the wooden corridor beside the Japanese garden. Walking along the corridor on a cold October night and sweeping by the candles in my yukata and tanzen made me feel I was really experiencing Buddhist temple life, something I had never come close to doing in my life.

Shojoshin-in is located beside the entrance to Okunoin which is an enormous cemetery of over 200,000 gravestones in a cedar forest. Many of the cedar trees are huge and seeing the graves among the cedar trees is truly a unique sight. After dinner and an evening bath, I highly recommend an evening stroll through the graveyard. The “sando” (entrance path) is about 2 kilometers long and it is lit by stone lanterns and overhead lights. It is light enough to see but just dark enough not to lessen the effect of the gravestones and the towering cedar trees on either side of you. Being close to Halloween, I was very nervous about walking along the path at night by myself so I took my niece for protection! Surprisingly, it was not Halloween-spooky at all. Actually, it was incredibly peaceful and relaxing and we enjoyed ourselves immensely. We both later commented it was one of the highlights of the trip. There was nobody around and I felt a complete inner calm and tranquility, almost like being in a large beautiful church you know so very well or a special place you like to go to be alone and at peace with yourself. We left the temple quite late and we had to hurry a bit as we walked but we were never spooked or felt unease at all. The walk along the “sando” at night after a bath is highly recommended for any guest at Shojoshin-in.

Probably the only thing better than the evening walk at Okunoin was the early morning service at Shojoshin-in. We woke up at 6:00 am and after splashing cold water on my face, brushing my teeth, and having a cold-water shave all of us made our way to the prayer temple. The prayer area was full with the other guests and five monks. We lined ourselves up beside each other on the tatami mats behind the monks (for those who did not like to kneel on the mats there was a row of seats against the back wall). The prayer room was beautifully decorated and when the monks began to chant I drifted off into a kind of hypnotic state and soaked up the rhythmic state of the chants. The choral chanting performed by the monks was wonderful, and although I did not understand what was being said I thoroughly enjoyed it. After the service (which lasted about 30 minutes) we were taken to the treasure rooms and shown some of Shojoshin-in’s priceless valuables. Only Japanese was spoken during the service and the tour of the treasure rooms but the sights and sounds of that morning needed no translation. Although I have almost no knowledge of Buddhism, that did not in any detract from this very holy experience. If you decide to stay at a temple, please attend the morning service – it is truly a once-in-a-lifetime event and not to be missed. After the morning service, we returned to our dining area and had our vegetarian breakfast. Again, it was a very delicious meal and a perfect way to finish our stay at Shojoshin-in.

If you decide to stay at a temple, there are a few things to keep in mind. A temple does not offer the personal service of a ryokan and there is less flexibility. At a temple, your stay is more regimented and you must follow a certain “to do” list in a particular order:

The temple rooms are not as modern as many ryokan guest rooms. While they are tastefully decorated, the rooms are not as insulated as most rooms in the ryokans. For example, during the colder months, the rooms can become very cold at night. The heaters in the rooms are modern kerosene heaters and they warmed up the room quickly (tip: after you push the button you have to wait for a little before the heat turns on). The futons were nice and thick but at night my head was cold after we turned off the heaters. I recommend turning the heaters on again in the middle of the night for a short time to warm up the room again. The kerosene gives off a bit of an odor so I would not leave them on all night.

Whether you are living in Japan or visiting Japan for the first time, you must try an overnight stay at a temple on Mount Koya. Although it may be a bit of a journey to get to Mount Koya, it is well worth the effort and you will come away with a very special feeling toward this holy mountain together with some wonderful memories.