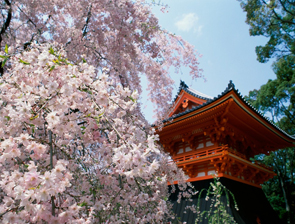 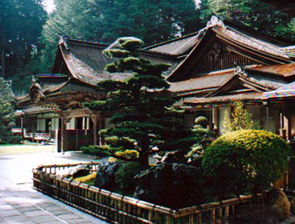 Shuffling in our stocking feet at 6:30 a.m. along the dark wooden corridor of the temple from our room, we headed to the prayer hall. The other overnight guests, a Japanese group, we’re doing the same. Recorded choral music had awoken everyone shortly before. We were now about to experience morning prayers in a temple on Mount Koya, in the Kansai region of central Japan.

We entered a sumptuous space, quite unlike the sober style of the rest of the temple’s wooden buildings. The room was dimly lit by numerous delicate Japanese lanterns, and by candles on the altar. The columns were clad in luminous orange and yellow silk fabrics, and golden curtains of filigree metal were suspended from the ceiling. Beyond a low railing was the large altar, adorned with many ritual ornaments including elongated bronze lotus-shaped vases containing white and yellow flowers. Lush incense wafted from three porcelain bowls.

The congregation took their places kneeling or sitting cross-legged on the tatami mat floor. A solemn Buddhist monk, his head shaved, entered the altar area. He wore ornate vestments, including a diaphanous fabric over patterned robes, and ceremonial sandals. Holding his prayer beads, he proceeded to provide a detailed explanation of the religious significance of the rituals involved in honoring ancestors at a cemetery. These included the number of incense sticks to be lit, the role of flowers to provide a resting place for the deities, the need for an offering of fruit, and of drink, which could range from water to sake, and even coffee. Buddhism is associated in Japan with death. This temple has responsibility for thousands of tombs in the vast Okuno-in Cemetery, a magnificent necropolis nearby containing memorials to the elite of Old Japan.

A younger monk appeared. This was the person who had arranged registration the day before. He looked then like a member of the maintenance staff. Now, he was transformed by his elaborate ochre-colored robes and the dignity of his office. The service commenced, with the monks turning their backs to the congregation, and the senior monk sitting cross-legged on an orange silk cushion on the edge of the altar. To the uninitiated, the main features of the service were the continuous deep chants in unison of the officiates, their occasional striking of a bell, and gentle banging of ancient cymbals. The effect was deeply moving and timeless.

When the service was well underway, the 30 Japanese members of the congregation started unexpectedly to rise from the tatami mats, and without further ado, they all left. Uncomfortable at being the only participants, we withdrew as well, leaving the monks to conclude the service on their own. The others headed to the entrance of the temple grounds, where a large tour bus had pulled up for them.

We were at Kongosanmai-in Temple, built in 1223 by the widowed Hojo Masako, one of the most powerful women in Japanese history. She had it constructed in memory of her husband, Minamoto Yoritomo. He had been the leader of the Genji clan which struggled for supreme power in 12th Century Japan with its arch enemies the Heike. In a decisive battle, he had vanquished them and had become shogun. The approach to the temple is along a lane in the village of Mount Koya. The traveler follows a long high wall until reaching the gate, which opens into a scene of breathtaking beauty and serenity. Surrounded by majestic black cedar trees, the main buildings in the complex are made of dark, weathered wood. Their striking roofs are of the graceful Japanese up-swung design, covered with a thick layer of finely trimmed shingles. Ornate wood carving including fanciful depictions of elephants, lions – and dragons – surround the entrance porch. To one side of the grounds is an elegant two-storied pagoda from the 13th Century. The sober flagstone-covered courtyard is interspersed with formal Japanese gardens, containing pruned pine trees and shrubs, a pond, a few selected rocks, and surrounded by a low bamboo fence. The only sounds are of birds and of water flowing into the pond from a bamboo spout.

Upon arriving the previous afternoon, we had been shown to our simple tatami mat room, with a small seating area looking out onto a Japanese garden including a stone lantern. The tranquility was extraordinary. The room had no chairs, and its only furniture was a low lying table, on which had been set some traditional small pastries, cups, and pot of green tea. There was no bed. During our dinner, served in an identical room across the hall, our futon bed was prepared on the floor. We indicated to the attendant that we wished three layers of mats, but even that Western extravagance did not ensure a particularly comfortable sleep. And the hard pillow consisting of buckwheat was not a positive factor.

Our meal was served in numerous small bowls and dishes on a red lacquer tray, set about six inches off the floor. We sat cross-legged on thin cushions to eat it. The menu consisted of vegetables, two kinds of tofu, miso soup, pickles, and a savory custard. A generous container of rice provided additional sustenance. Dessert consisted of two poached plums. Unlike most other meals in Japan, there was no fish, and certainly no meat. Fortunately, the sect’s rigorously vegetarian diet permits beer. The monk serving us surprisingly proposed large bottles of beer. The repast was delicious, albeit lightly flavored. After our meal, there was no opportunity to enjoy any village nightlife, as the gate to the temple was closed at 9:00. The evening recreational activity, as in other traditional accommodations in Japan, was the communal bath.

This temple is one of about 60 which receives overnight visitors. In all, there are about 120 Buddhist temples on Mount Koya. In its heyday, there were over a thousand. Its history stretches back to the early 9th Century when Saint Kukai, the founder of the Shingon sect, established a monastic retreat. Buddhism first arrived in Japan in the 6th Century, from China, a thousand years after its founding in India. Mount Koya still attracts a million pilgrims every year, many wearing distinctive white cotton coats and carrying a ritual walking stick. It is most conveniently reached by train from Osaka. The train rushes across the plain past villages and rice paddies, before starting to climb the mountain. Passengers transfer to a funicular which whisks them up through a virgin forest to the enclave of Mount Koya, where, at 900 meters, the air is purer and more temperate than in the plain below. Where things move at a more measured pace. This seems appropriate, given the community’s religious vocation for the last 1200 years.