Japanese carpentry has a history of over 1,000 years. Though in western construction we tend to separate architect/designer from the constructor, in Japan the carpenter is also the architect. Japanese carpentry is known for its ability to create everything from temples to houses to tea houses to furniture without the use of any nails, screws, or power tools. This is done through a process called joinery. Joinery involves the creation of interlocking joints that join together carefully selected pieces of wood. We will discuss wood types in this article later. Traditional Japanese craftsmanship is evident in many of the different ryokans located in Japan. For now, however, let’s examine some of the different types of joinery and how this unique craft can make the ryokan experience even better. 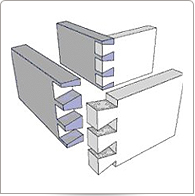 One common method of joining, and also a very simple method, is the dovetail design, which is illustrated to the left. 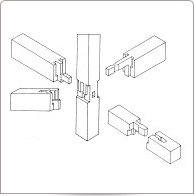 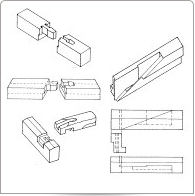 Though dovetailing is effective at joining boards together, it is a relatively novice technique that is more appropriate for small-scale projects than larger ones. Traditionally in Japan, carpenters are also architects and home-builders. This means that there is a requirement for master Japanese carpenters to apply advanced techniques for large-scale projects, such as tea houses, shrines, and homes. Some examples of these high-level joinery techniques are illustrated to the left. 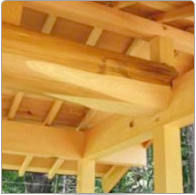 Joinery as seen in a Large-Scale Project

In effect, these advanced techniques allow for greater load-bearing weight and also allow for a major construction project without the use of common western materials like nails. Of course, the disadvantage to Japanese carpentry is that it is a difficult skill to master, and it also requires a larger time investment. It is very laborious to craft these pieces together using Japanese joinery, and it is a testament to the mastery that these carpenters possess along with the long Japanese history of over 1,000 years in intricate woodworking. Although the joinery here is not visible to the layman

Another skill that the master Japanese carpenters must undertake is being able to not only select quality timber but also knowing how to age and treat the wood. The wood used in major projects is often aged and carefully selected to ensure that it is top quality. A famous type of wood used in traditional Japanese construction is Japanese cypress, which is called hinoki. This wood is selected for its high resistance to rot, its clear grain, and its support strength after aging. The Japanese cypress has been cultivated and used for traditional Japanese construction for over 1,000 years.

There are generally four types of master Japanese carpenters/woodworkers. The first, miyadaiku, are experts in the construction of temples, shrines, or other large projects. The second is the sukiya-daiku, who are known for teahouse construction and for similar projects that involve delicacy and historic detail. The third type is the sashimono-shi, who work primarily on building furniture. Lastly, there are the tateguya, who do interior finishing work. Although it is not common for a Japanese carpenter to work outside of his specific mastery, it does occur. There are carpentry workshops in Japan that will perform two separate realms of mastery, most often that of the miyadaiku and sukiya-daiku.

Japanese carpenters are true artists, and their joinery techniques and soulful appreciation of strong woods like the hinoki make them special within their craft. Their craft is one that has been honed and perfected over more than a millennium, and it shows. It is beautiful to watch Japanese carpenters in action and to see the final product, and there are several videos and websites available around the internet in order to learn more. Of course, if you want to see the real product first-hand, Japan’s ryokans offer a look back at traditional Japanese architecture and carpentry. For those who can appreciate Japanese carpentry, staying at a traditional ryokan may be a rewarding and educational experience.