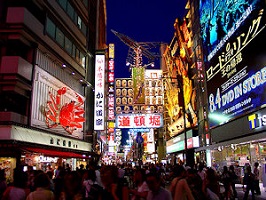 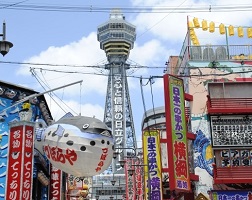 Osaka is the largest city in western Japan, and its history dates back over 1,500 years. During the Edo Period, Osaka became an important distribution center as feudal lords sent their rice to the Osaka merchants for delivery to other parts of Japan. As the merchants prospered, the city grew and flourished. Today, Osaka is a large industrial and commercial city with a population of over 2.5 million people. The city is also known for its traditional Kabuki theater and Bunraku puppet theater as well as its fine Japanese cuisine. For more information about Osaka please see our travel content partner Japan-Guide

Experience the Spiritual Side of Japan at Mt Koya (Koyasan).
Osaka is also near Nara, Kyoto, Yoshino

Welcome to Kaneyoshi Ryokan. This Modern Ryokan is conveniently located in the heart of downtown Osaka. From Kaneyoshi Ryokan, guests can quickly access all major transportation links as well as the city's finest restaurants, stores, and nightlife. There are 15 Japanese-style rooms at Kaneyoshi Ryokan, and each room has its own private bath and toilet. There are indoor shared baths for both women and men (same gender only). A Japanese-style dinner and breakfast are served to guests. Check...

Welcome to Yamatoya Honten. This Ryokan Hotel is located in the heart of Minami Osaka (South Osaka) which is Osaka's premier shopping and entertainment district. The staff at Yamatoya Honten are very courteous, and they go out of their way to make guests feel comfortable and at home. There are 39 Japanese-style rooms at Yamatoya Honten and each room has its own private bath and toilet. There are also shared indoor baths for both women and men, open from 15:00 to 1:00 am and from 6:00 to 9...

Welcome to Hotel Kuramoto. This Standard Ryokan is conveniently located in central Osaka City, near Namba. It has 24 Japanese-style guest rooms with private baths and toilets. There are two indoor baths (not hot spring baths), one for women and one for men, open 16:00-23:00. Traditional Japanese-style cuisine is served to the guests at Hotel Kuramoto. Check-in time is after 16:00 and check-out time is before 10:00. Parking is available with a reservation, and the charge is 1,500 yen betwe...

Guest Rating: No Reviews Yet

Welcome to Hotel Ichiei. This Ryokan Hotel is located in the Namba district of Osaka. Hotel Ichiei was first establish in 1950 and has 22 rooms, all with their own private bath and toilet. All rooms have a view on the Osaka city. You will have the chance to enjoy healthy Kaiseki for dinner and breakfast in the comfort of your rooms.

Welcome to FON-SU bed&breakfast previously called HOSTEL 64 Osaka. This Modern Ryokan. This affordable inn is a renovated work by an architectural design office, so it has a designed modern style blended with Japanese retro flavor. It is conveniently located near fashionable and popular areas in Osaka such as Shinsaibashi, Horie and Namba. It has various types of rooms from Japanese-style Tatami room, Western-style room to Dormitory room. There are shared toilets and 4 kinds of unique sho...

Guest Rating: No Reviews Yet